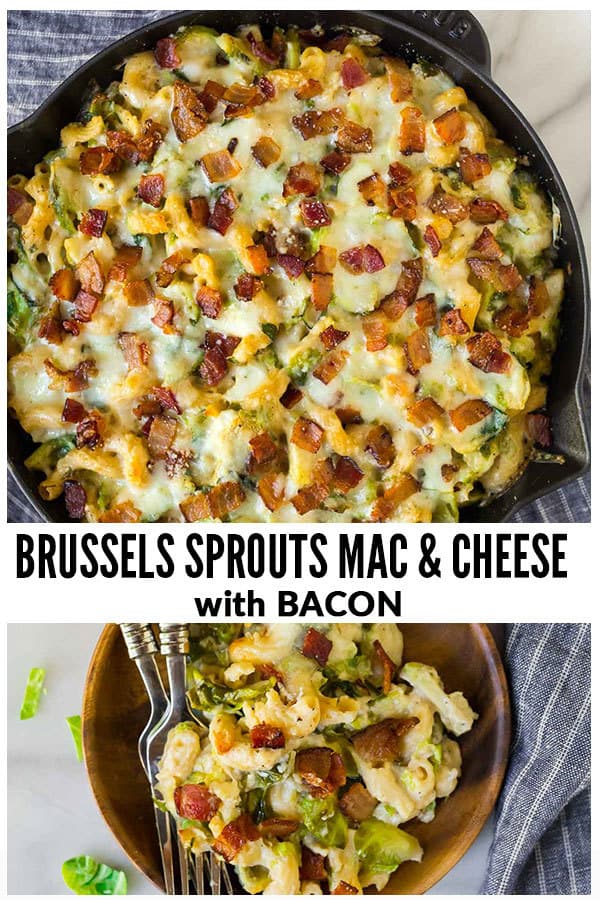 I’d like to tell you that this Brussels Sprouts Mac and Cheese with Bacon is a foolproof side dish that is sure to wow at your Thanksgiving and holiday tables, convince even the staunchest of veggie skeptics to eat their greens, and have everyone begging for the recipe, but (while I firmly believe all of this to be true), I have to confess something else instead.

I have absolutely no idea what this would be like as a side because, despite my intentions to serve it as such, we devoured the entire thing for our main meal.

I meant to serve this Brussels sprouts mac and cheese with chicken, but as soon as he tasted the mac, Ben scooped a huge serving of it onto his plate, gave me a sincere look, and stated matter of factly, “I’m not having any chicken.”

I reacted the way I did whenever my mom made the blue box mac growing up: I piled my plate high with Brussels sprouts mac and cheese too. I couldn’t let Ben get to it all!

Just like this Tuscan Chicken Mac and Cheese, it’s rich, creamy, and tastes over-the-top indulgent. I do truly hope you make it for Friendsgiving, Thanksgiving, and every holiday to follow because it will fit right in with the classic spread. Thanks to a few sneaky swaps, however, this mac and cheese recipe is actually far healthier than its creamy, cheesy taste and texture suggests (just like this Cauliflower Pasta).

Secrets to a Lighter Brussels Sprouts Mac and Cheese Recipe

In place of heavy cream, I used low-fat Greek yogurt, which gives the sauce the same velvety richness but is far lower in fat and high in protein.

For the cheese, I selected varieties that pack a punch, so a lesser amount goes a long way. My picks are extra-sharp white cheddar, which melts beautifully and has a classic mac-and-cheese taste I adore, along with Parmesan for its savory/salty factor and the way it browns in the oven to give the mac and cheese its tasty golden top.

My final two healthy tricks: I used whole wheat pasta in place of the regular white pasta (undetectable!), and, of course, we have our glorious green, the Brussels sprouts!

I am firmly convinced that anyone who doesn’t like Brussels sprouts simply has not had tried them cooked properly yet.

First, we sauté the Brussels sprouts with bacon (YUM), then liven them up further with a touch of lemon juice and generous amount of black pepper. Don’t skimp here.

The lemon might sound like an odd choice, but Brussels sprouts crave acid. The lemon also helps cut some of the richness, making it even harder to stop yourself at one serving. The black pepper is lively and gives the Brussels sprouts mac and cheese true pizzazz.

I decided to create this healthy mac and cheese recipe when a neighbor mentioned that she’d ordered a Brussels sprouts mac and cheese at a restaurant and knew I’d love it. I started poking around for recipe inspiration and found it in a cookbook written by one of the food bloggers I admire most, Deb from Smitten Kitchen.

In her latest cookbook, Smitten Kitchen Every Day, Deb has a recipe for a weeknight Brussels sprouts pasta bake that she touts as one of her household’s new favorite weeknight dinners. Deb’s recipe goes heavier on the cheese than mine does. I promise this Brussels sprouts mac and cheese is plenty cheesy; I’m actually glad I didn’t add more. Deb’s version also does not include bacon, which we certainly enjoyed.

When I first looked at the recipe, I thought that it seemed more of a side dish versus a main, but after witnessing the way Ben and I inhaled it, I can state from experience that it’s a fantastic option for both. Give this Brussels sprouts mac and cheese a test drive for dinner this week, then make it again to wow your guests at Thanksgiving and beyond!

4.91 from 10 votes
Brussels Sprouts Mac and Cheese with Bacon. Creamy, cheesy, and absolutely delicious! Perfect for a comfort food side or weeknight dinner.
Prep: 5 mins
Cook: 50 mins
Total: 55 mins
Servings: 4 servings (as a main or 6 as a side)
Review Save SavedPrint 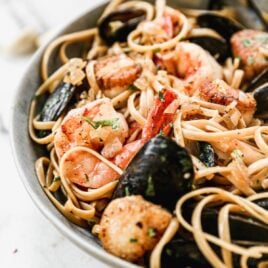 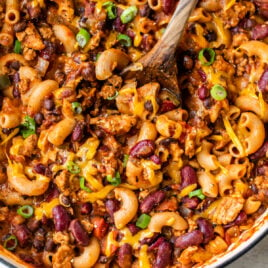