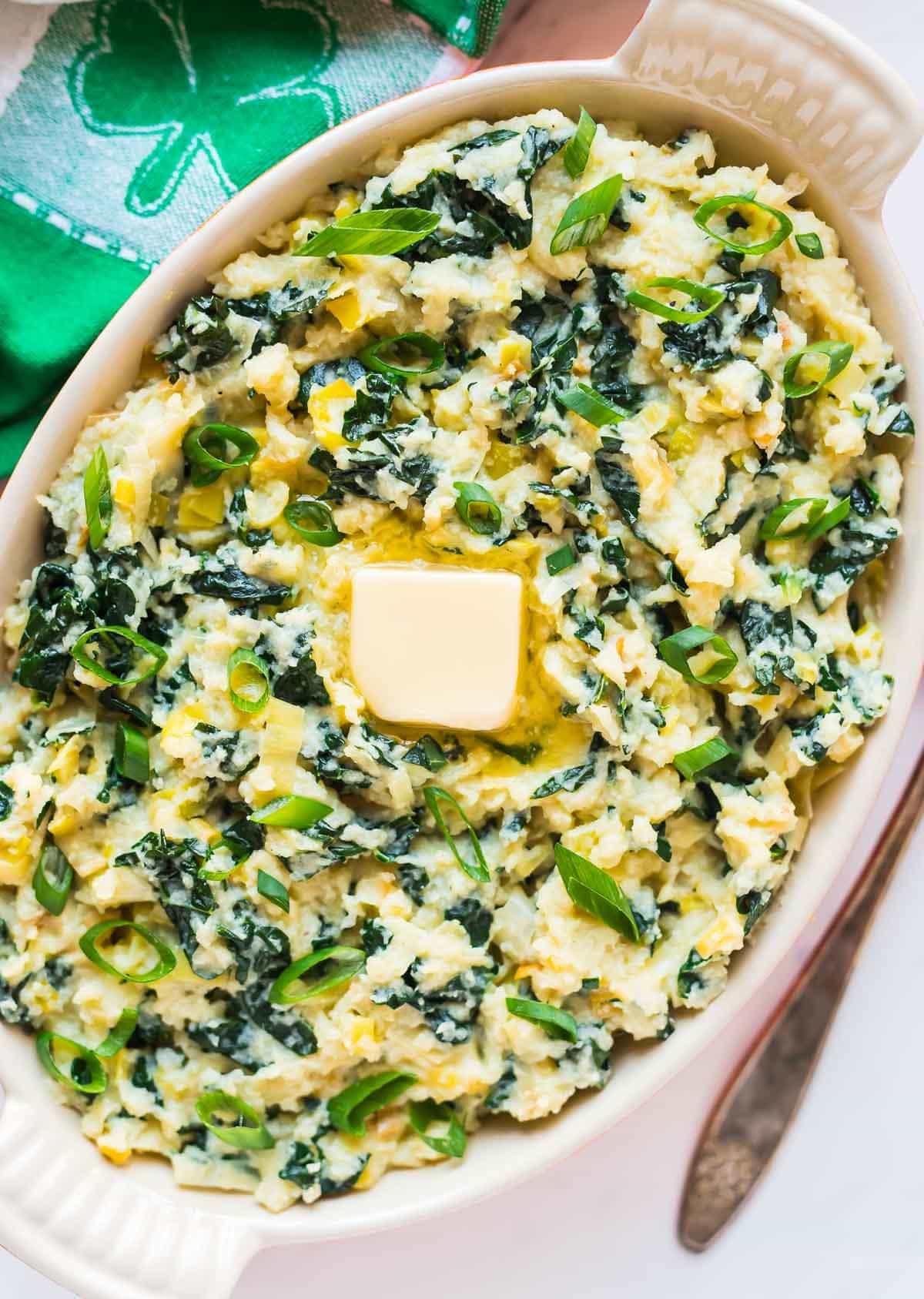 I may be risking a bolt of lightning from my Irish ancestors for this Mashed Cauliflower Colcannon with kale, but it turned out so deliciously that it’s a chance I am willing to take.

A healthy, low-carb, and (gasp!) vegan twist on colcannon, a classic Irish potato-based dish, this mashed cauliflower ditches the spuds and butter in favor of lighter ingredients.

It has all the creamy, soulful comfort of the traditional recipe that inspired it, but it is gloriously guilt free.

Like many classic Irish foods, traditional colcannon is of the “stick-to-your-ribs” variety.

A textbook recipe for it would include mashed potatoes, kale (or cabbage), cream and butter, and a mix of leeks, green onions, and/or chives. It’s starchy and warming, but it’s a lot heavier than what I’m looking for in my vegetables most nights.

Because colcannon, while heavy, is yummy, and because St. Patrick’s Day is coming up this week, I decided to see if I could employ a popular culinary trick—swapping low-calorie, low-carb mashed cauliflower for mashed potatoes—to make a healthy version of Irish colcannon that will still be creamy and satisfying.

Not only did the swap work, this “Irish Mashed Cauliflower” turned out to be one of my favorite side dishes in a long, long time.

Whether you are looking to please picky eaters, sneak a few extra vegetables into your diet, or freshen up your side-dish routine, this mashed cauliflower with kale does not disappoint.

I didn’t originally intend for this mashed cauliflower to be vegan or dairy free. In fact, I didn’t think I’d be able to create the comforting vibe I was after without the help of at least a liiiiiittle bit of butter and heavy cream.

Midway through making it, I felt the pull of experimentation. I decided to see what would happen if I replaced the butter with olive oil and the heavy cream with almond milk.

I used a traditional colcannon trio of kale, leeks, and green onion. I love the texture of the hearty kale contrasted with the creamy mashed cauliflower, as well as its green color for St. Patrick’s Day.

The leeks and green onions give the mashed cauliflower a bright spring flavor, and the extra hit of green makes this colcannon even more festive.

My final trick to making this vegan mashed cauliflower taste rich despite being dairy free is nutritional yeast. I’d seen it used in vegan recipes for ages but only recently tried it for myself. I love it!

In addition to offering a wealth of vitamins, minerals, and protein, nutritional yeast provides a lightly salty, “cheesy” flavor to dishes. I found that two tablespoons were just the somethin’ somethin’ this low-carb cauliflower mash needed to taste a little naughty, despite being nothing but nice.

For those of you wondering about what looks like a pat butter in the photos, it’s actually a bit of vegan buttery spread that I added for the sake of taste testing and to help convey visually the comfort food feeling this recipe offers. In the end, I loved it just as much without. 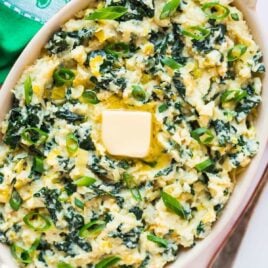 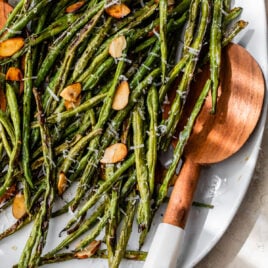 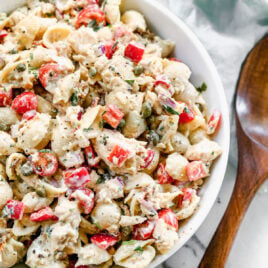