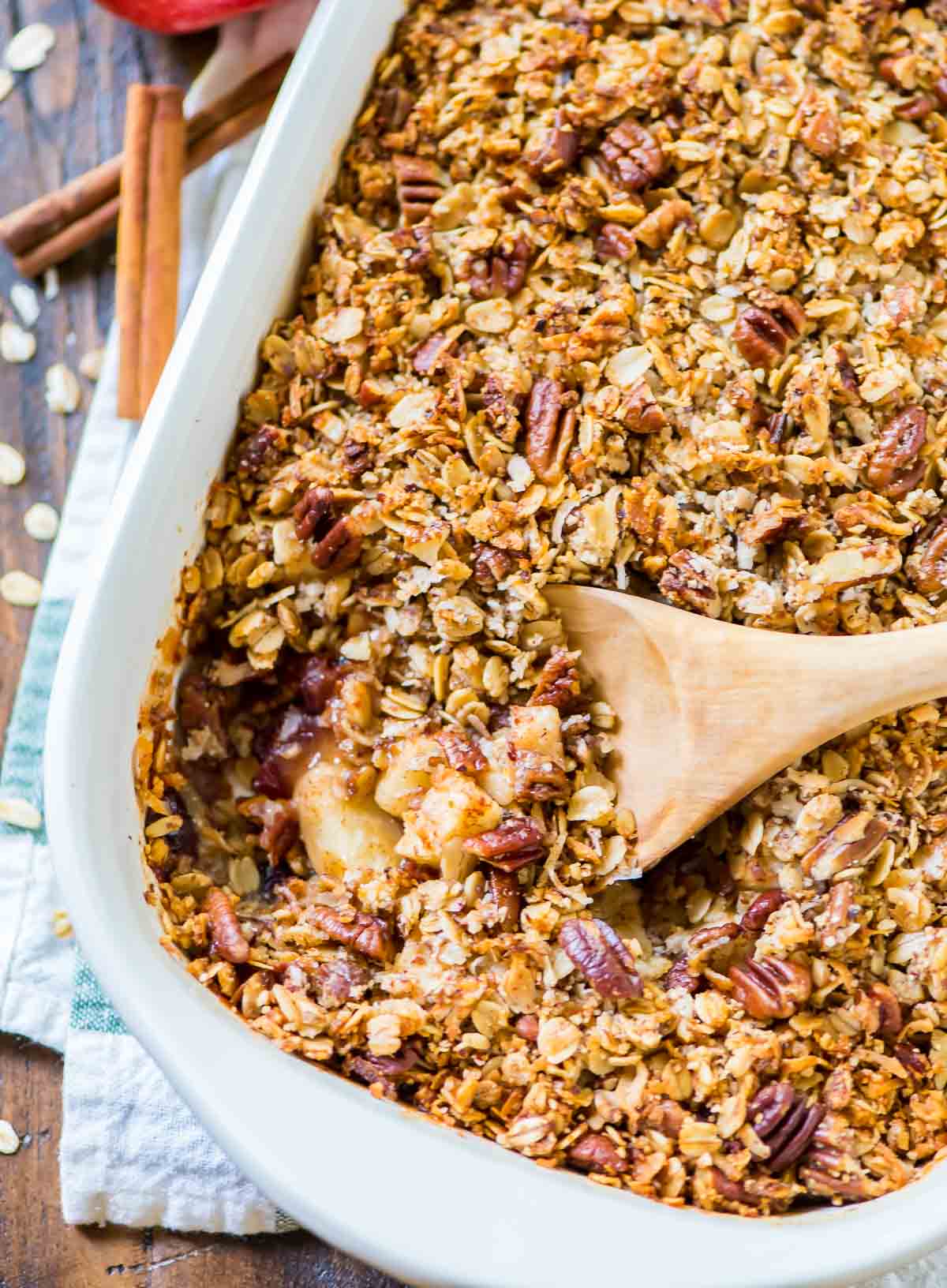 In the spirit of full disclosure, I didn’t set out to make this a vegan apple crisp or a gluten free apple crisp, or really anything other than ridiculously yummy.

As fall fortune would have it, however, it turns out that this apple crisp recipe, my absolute favorite fruit crisp to date, happens to be all of the above, and it’s healthy too! (If you prefer a little butter in your apple crisp instead, try my Crock Pot Apple Crisp.) 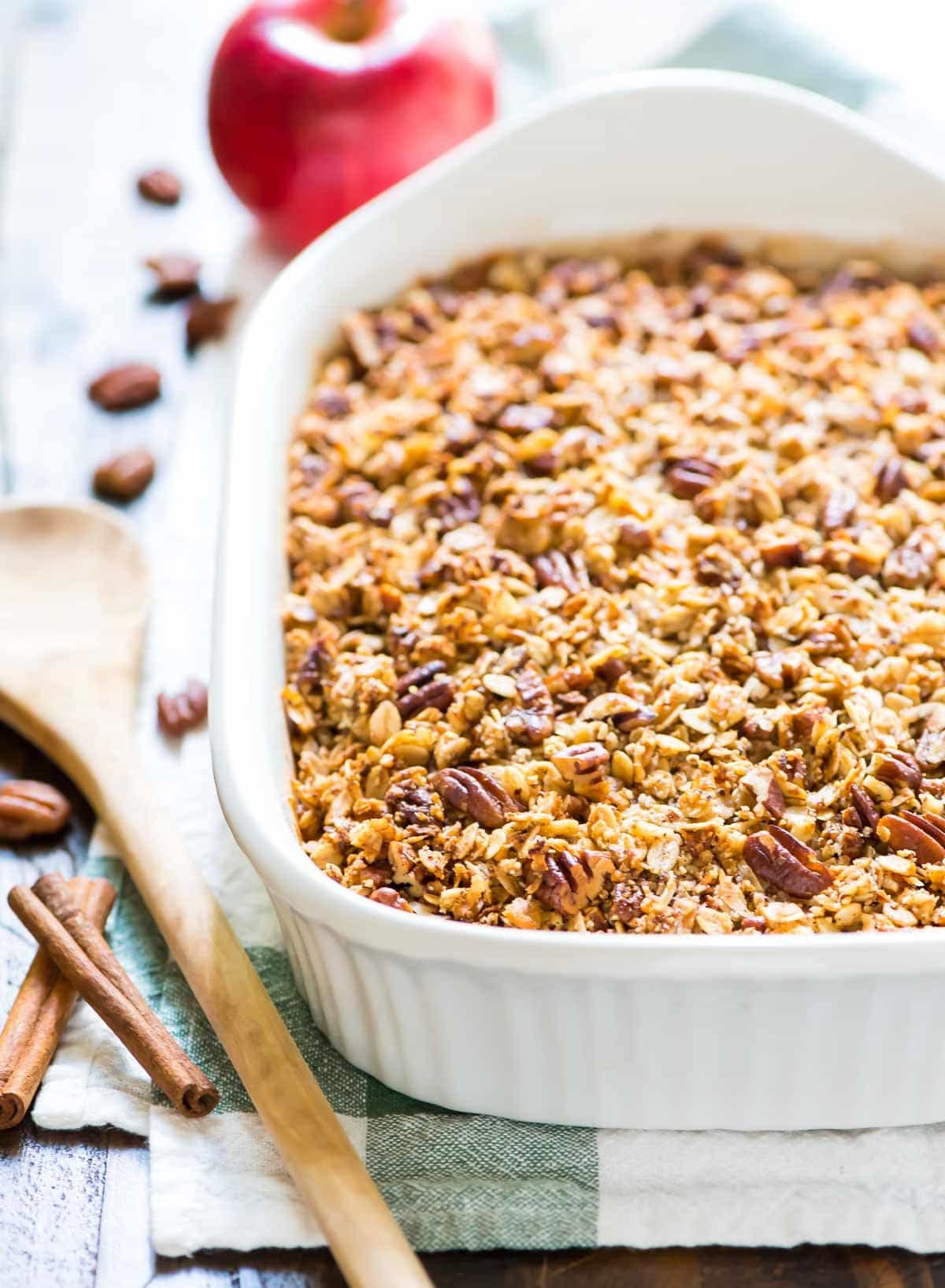 I will warn you: backing away from this vegan apple crisp is a feat of physical and mental prowess that exceeds the abilities average mortals. If you can stop at one spoonful of the crunchy, toasty, cinnamon-spiced perfection that is this vegan apple crisp, you are made of stronger stuff than I. 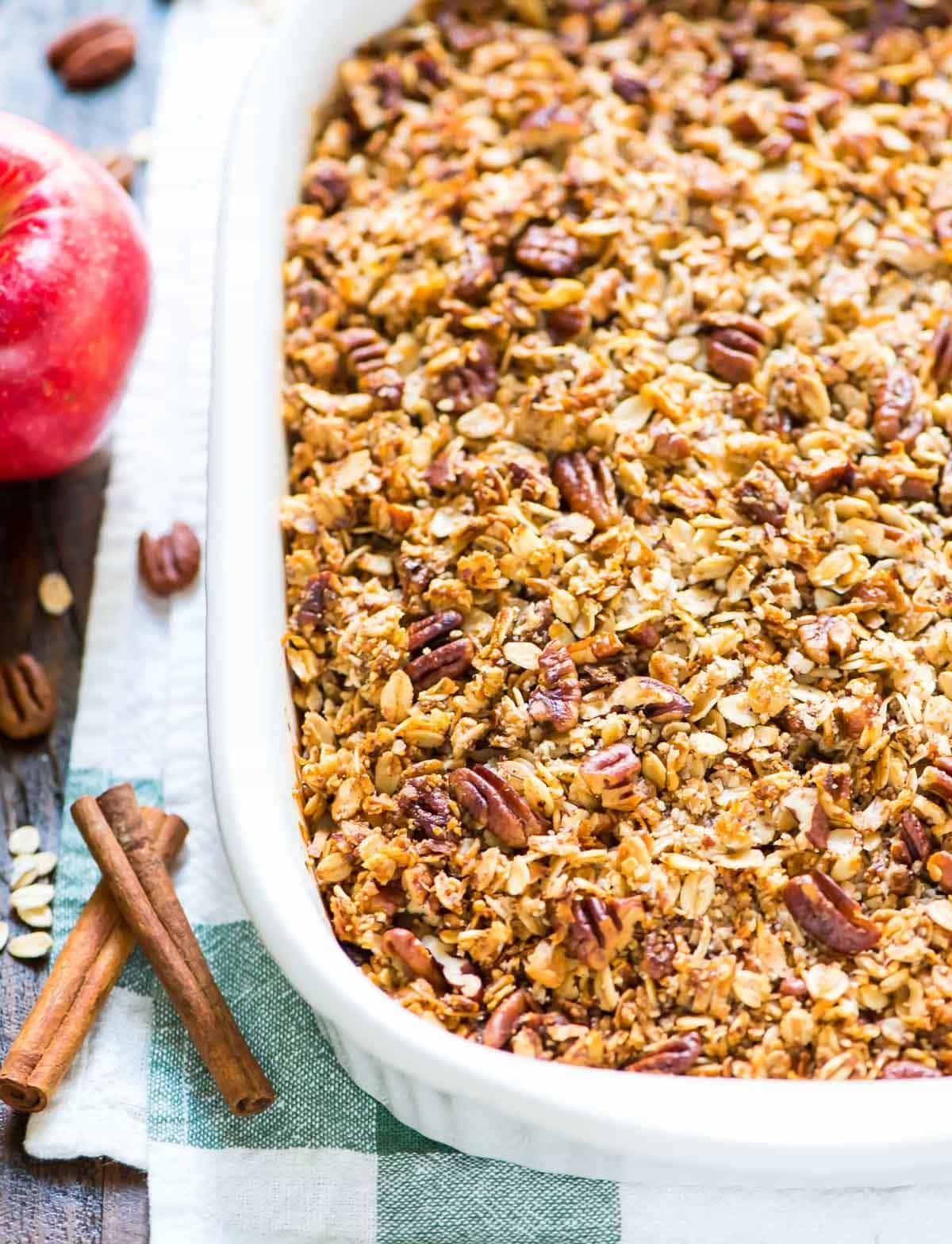 I made this vegan apple crisp with a blend of my beloved Honeycrisp apples and Granny Smith, but any firm baking apple will do nicely. If you have apple picking on your autumn agenda (or just need another excuse to eat apple crisp), this healthy apple crisp recipe is the perfect way to polish off your haul (this Apple Bread would also be delicious). For another healthy vegan recipe, try this Apple Smoothie.

The vegan apple crisp topping is a blend of oatmeal, almond meal, flaked coconut (adds extra addictive toastiness, not a coconut flavor, so if you are coconut adverse, fear not), maple syrup, cinnamon, and coconut oil. Mix the topping up in a single bowl, then “quality test” it by taking a bite before sprinkling it over the apples. You will be very, very happy that you did.

Looking for a gluten-free topping? Try my Gluten Free Apple Crisp instead. 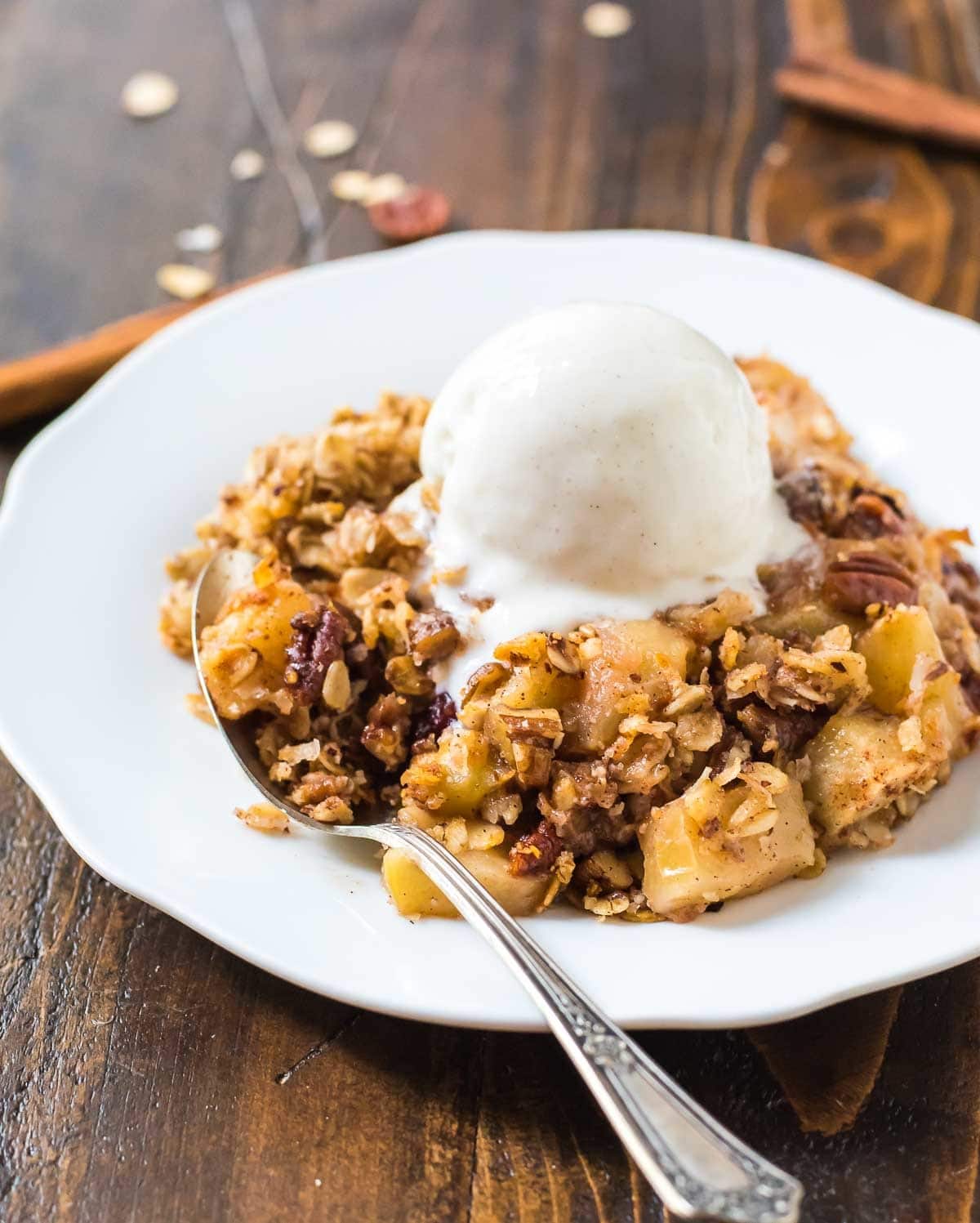 The final touch that launches this vegan apple crisp to the superlative “best apple crisp of your life” is a handful of dried cranberries. Last fall, my friend Conor tossed a handful into his homemade apple pie (in honor of his wife Kate, a cranberry fiend), and when I tasted a bite, I knew that I’d eaten something special. One year later, I still remember how lovely the cranberries’ chewy, sweet pop was paired with the apple filling, so I followed suit and added them to this vegan apple crisp too. Aren’t they just the prettiest little jewels? 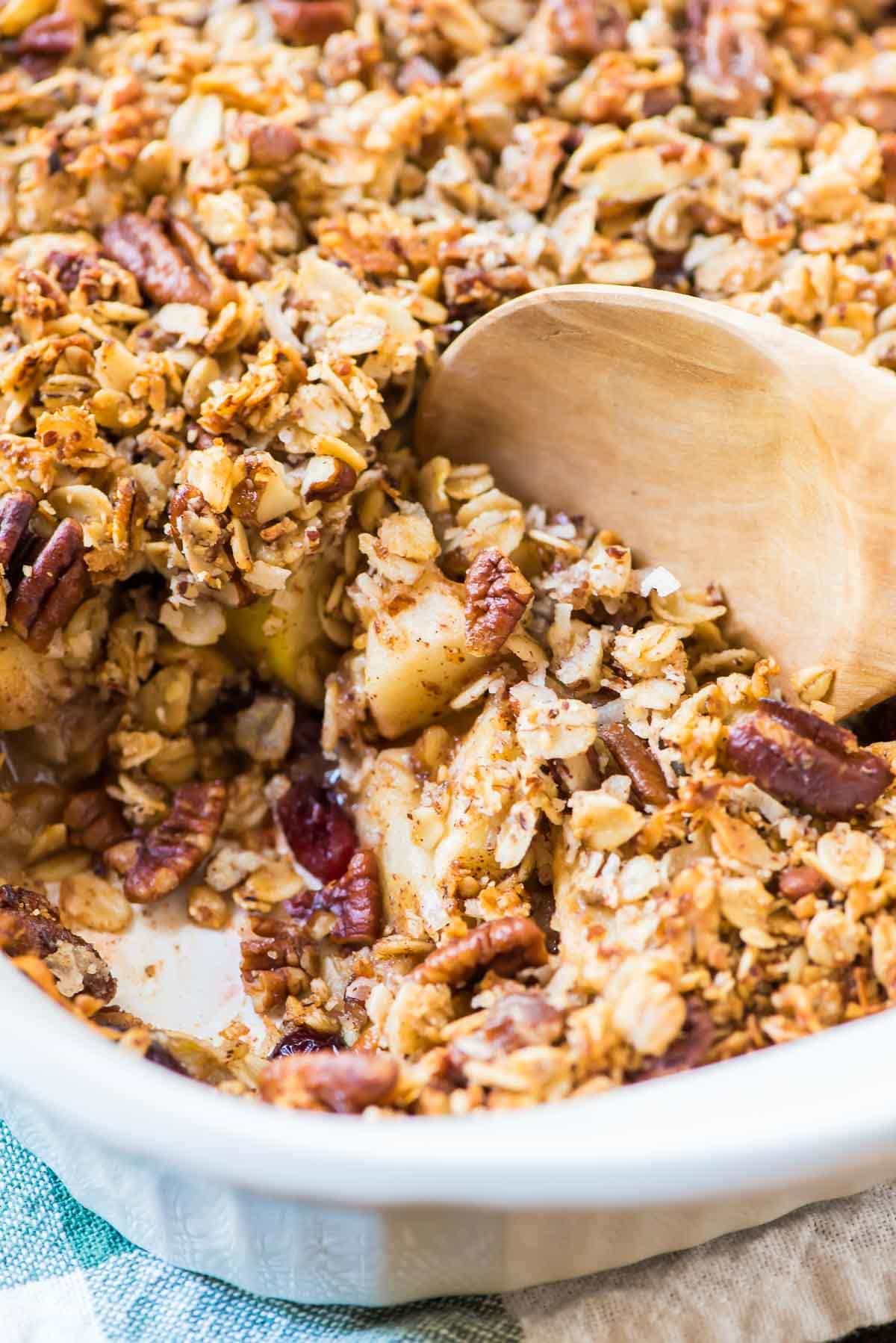 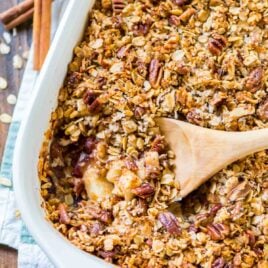 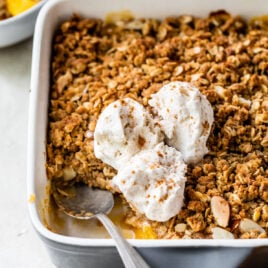 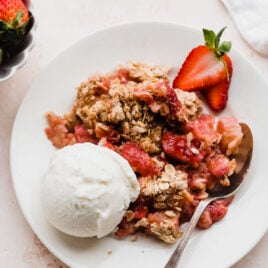