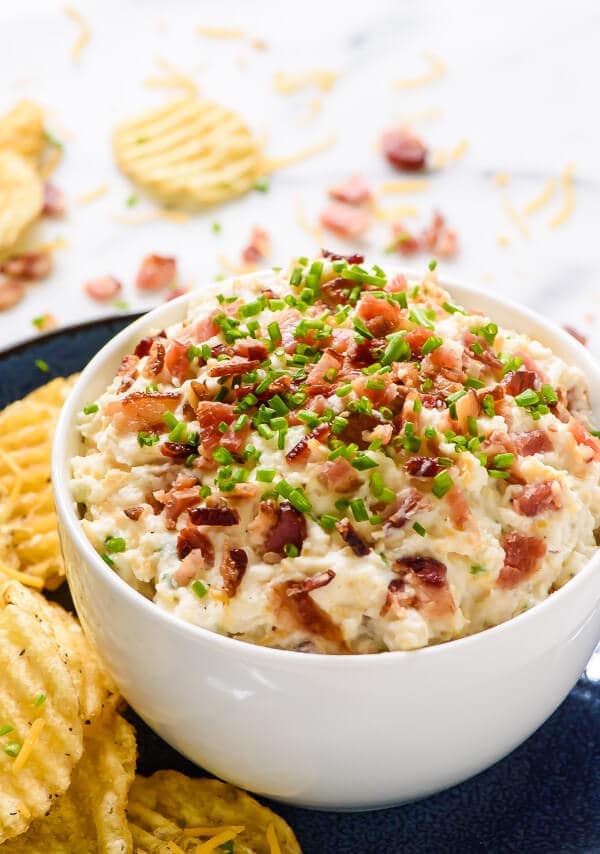 After moving to Wisconsin, I quickly learned that the state has two times of day: During the Packers Game and Every Other Time. And in our house, both of those times call for Loaded Baked Potato Dip.

At first, I didn’t fully comprehend (or appropriately respect) the cheesehead fervor.

I’d ask a friend to go to a movie on Sunday afternoon, only to be met with a look of disbelief. Didn’t I know that the Packers were playing at the same time as the proposed matinee?

And really, what movie theater had the nerve to screen anything other than the Packers at game time anyway?

If Ben and I went out to eat during a Packers game, it was common, accepted practice for our server to stop by our table only at commercial breaks; otherwise, she’d be with the rest of the wait staff, watching the game in the restaurant bar.

For an errand-running experience with zero traffic and zero cash register line guaranteed, I could go during a Packers’ game.

The rest of the state, with the exception of the poor cashiers who stared at me in disbelief for being at the grocery store, was home cheering on the Pack.

Flash forward three years into my move to Wisconsin, and I will readily admit that my internal clock has become attuned to the Packers’ kickoff time, quarterback Aaron Rogers is top three on my celebrity crush list, and I wear a Packers sweatshirt every Sunday.

No matter how much or little you care about the game, football offers a premier excuse to gather with friends to unite around core sporting principles: teamwork, sacrifice, and of course FOOD.

Enter loaded baked potato dip. No matter how you feel about the old pig skin, you’ll cheer for what’s underneath the potato skin when you taste this recipe.

Of equal importance are the selected dippers.

Although potato chips aren’t something I eat with every meal, for any kind of football party, days at the lake, or when I need a salty treat (that’s not these crispy Potato Skins), potato chips hit the spot. (They’re also delicious with this Feta Dip.)

Make this potato dip extra cozy and serve it hot!

So far, this dip has made an appearance at two game watches, and on both occasions, I went home with an empty bowl, and the Packers won.

While I can’t directly attribute the win to the loaded baked potato dip per se, I’m still calling it an appetizer victory. 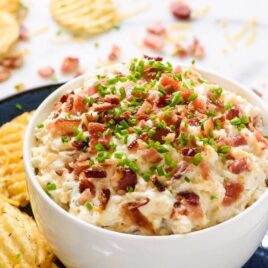 5 from 2 votes
Creamy, decadent Loaded Baked Potato Dip with bacon, sour cream, and chives. No one will be able to stop eating this addictive appetizer!
Total: 30 mins
Servings: 6 servings
Review Save SavedPrint 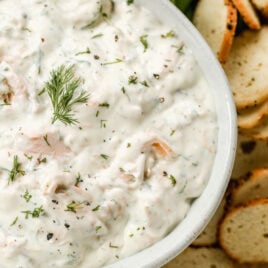 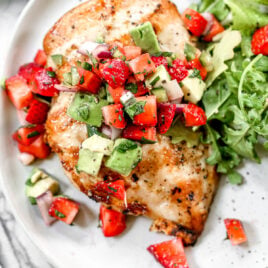 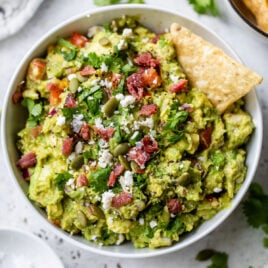