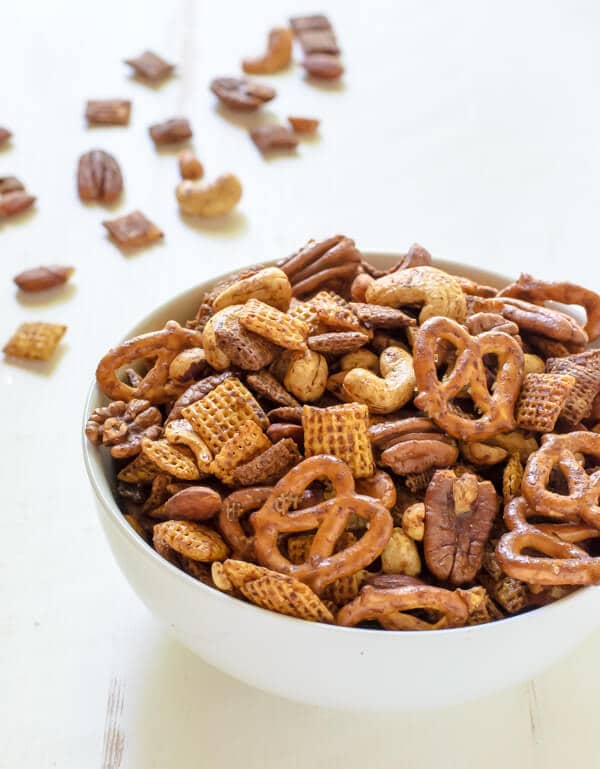 Super Man had Kryptonite. For Sampson, it was Delilah; and Achilles—someone definitely should have warned him about that heel. As I enjoy neither comic book hero nor Greek goddess-status, I’ve been endowed with not one but with many weaknesses, the most recent of which is this Sweet Spicy Chex Mix recipe.

I don’t know what it is about the combination of sweet and savory flavors that gives me the insatiable appetite of a teenage boy, but it happens every single time.

No matter what powers of resistance I muster, I am rendered powerless in its presence. These Salted Chocolate Almond No Bake Granola Bars? They melt me into a puddle like the Wicked Witch of the West. Irish Whiskey Ice Cream with Salted Caramel? My waterloo. Honey Roasted Cashews? Consider the batch gone.

Today’s salty, sweet, and spicy Chex mix recipe? It could be my greatest downfall yet.

About This Sweet and Spicy Chex Mix Recipe

I had the most honorable intentions when making this sweet spicy Chex mix. It was to be a wholesome, filling snack mix—a little bit naughty, yes, but still a respectable option to tide myself over between meals. The ingredients began innocently enough: whole grain Wheat Chex cereal (fiber!), Honey Nut Chex cereal (a little sweet for good luck), reliable pretzels, and a treasure trove of nuts: pecans, almonds, peanuts, and cashews, each offering healthy fats and protein. In place of the sticks of butter used in the typical Chex mix recipe, I swapped a beaten egg white and pure maple syrup.

Yes, this was going to be a very respectable snack indeed.

Then, the spices entered the equation, and all pretenses of self control were forgotten. I stirred a warm, smoky blend of cinnamon, chipotle, chili powder, and cumin in with the maple syrup. The spices give the Chex mix a lingering kick that, when combined with the sweetness of the maple and the honey nut cereal, is too seductive for petite portions.

Over and over again, I caught myself finding excuses to visit the kitchen, where I would be taken by an irrepressible need to “check” on the sweet spicy chex mix. Each time I lifted the container lid, the game was over. I’d reach for “just one more almond”…followed by a pretzel…followed by a handful of everything. After all, the flavors were created to be enjoyed together, so a smaller serving would have felt disrespectful to the sweet spicy chex mix itself. Don’t you agree?

This sweet spicy chex mix recipe yields a small, 4-cup batch of mix, as I’ve learned most intimately that keeping a larger amount in the house is a dangerous, dangerous game. If you’d like a larger serving (might I suggest it for tailgates, football parties, and Labor Day potlucks?), the recipe can easily be doubled for a crowd.

A sweet and salty chex mix that’s spicy, sassy, and all-around irresistible: I can only aspire to the same level of acclaim! 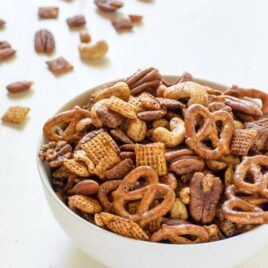 5 from 2 votes
A Sweet Spicy Chex Mix recipe made with maple syrup, cinnamon, and spice. This healthy version is made with an egg white instead of butter, but it is so irresistible, you’d never guess!
Prep: 10 mins
Cook: 1 hr
Total: 1 hr 30 mins
Servings: 4 cups (can easily be doubled)
ReviewPrint 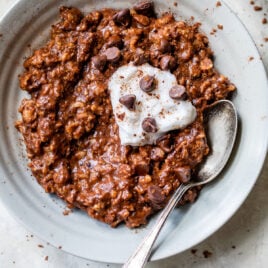 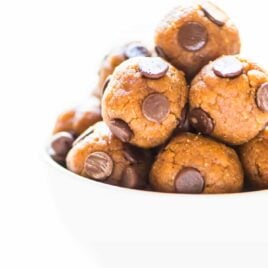 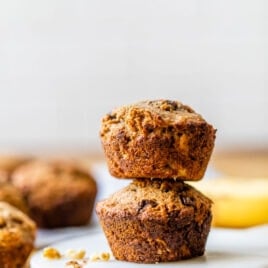